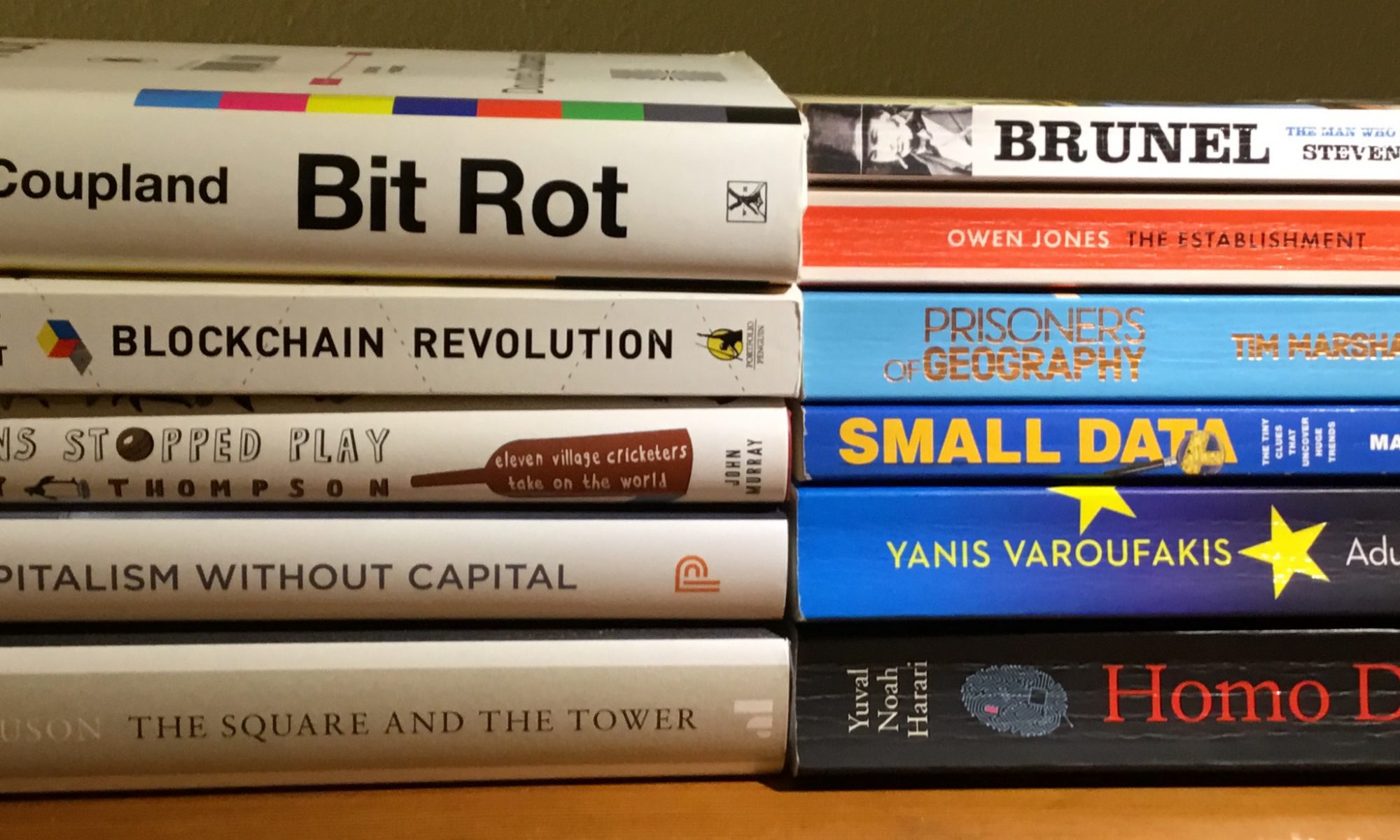 Here are some of the books that I finished this year (and some still to come):

The summer’s theme was about The Establishment. I started with “The Establishment, and how they get away with it” by Owen Jones, which paints a rather depressing picture of modern day Britain. It would be all too easy to write this off as a political tome peddling a particular view except that it is far too well researched, argued and believable.

I followed it up with “Adults in the Room” by Yanis Varoufakis, who pulls no punches in describing the events that led to the European establishment systematically steamrollering democracy and decency in Greece. Following on from his previous book, reviewed here, it really does make you question the European project.

Reading these two books really does shine a light on modern day society and the so-called political elite.

For a bit of lite reading, Bit Rot by Douglas Coupland is hard to beat. A collection of short stories and essays, this book feels more like how we consume stuff online, but on the printed page. It has some very good observational pieces on life in the internet era. The book has also been the basis of an art installation which must have stretched the experience somewhat.

Thought provoking in another way was Homo Deus, by Yuval Noah Harari. This provided a quick précis of themes from his earlier book Sapiens, but really got going in the second half predicting what the future holds. His descriptions of artificial intelligence and algorithms was enough for me to come off Facebook, and to minimize my use of Google. I had some time ago stopped using Amazon because of its business practices, but it’s use of data and algorithms is also justification enough to stop using it. As the old saying goes, there is no such thing as a free lunch. When it comes to who owns our data this has become an important question of our time.

One book that I should have given up on was “Blockchain Revolution” by Don & Alex Tapscott. Bought in an attempt to understand what the fuss is about I have to say I am still none the wiser. The authors are convinced that blockchain technology can do everything, but you have to trust them on that as their explanations are not convincing.

There are far more insights from Prisoners of Geography by Tim Marshall. This explains global politics based upon ten geographies. I have previously commented upon Small Data by Martin Lindstrom. I also read “Brunel: the man who built the world” by Steven Brindle. Despite the hyperbolic title it is a great read about a great engineer. He lived in a different era, but nevertheless the scale of his achievements is extraordinary.

Capitalism without Capital – the rise of the intangible economy, by Jonathan Haskel and Stian Westlake.
The Square and the Tower – Networks, Hierarchies and the Struggle for Global Power by Niall Ferguson.

That’s just as soon as I have finished Penguins Stopped Play: Eleven Village Cricketers Take on the World, by Harry Thompson.